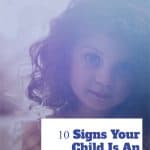 In the world of spirituality, there is a widespread belief that humanity is undergoing a new set of changes. It’s said that our kind is evolving to become a more spiritually aware species. The change isn’t just about society, either. According to spirituality groups, this sweeping shift in evolution is giving our children new abilities.

At the front of the new line of humanity is a group of children called Indigo Children. Indigo children are said to be blessed with unique gifts that make them more connected to the spiritual world and more empathic towards all life on Earth. Though this generation shift started in the 1970s, Indigo children are still being born today.

Your child keeps talking about seeing ghosts and paranormal activity.

Though it’s not limited to Indigo children, there’s no denying that this generation has a real deep tie to the other side. Indigo children are far more likely to see ghosts and experience paranormal activity than a typical person would be. It’s just part of their world.

When your child became a teenager, typical concerns didn’t bother them since they were more focused on the big picture.

Most teenagers worry about things like dating, popularity, as well as issues involving day-to-day business. We’ve all been there; it’s a myopic way of thinking. Indigo children, however, don’t have that same kind of worldview.

Indigo teenagers are more likely to be focused on spiritual growth, encouraging healthy behavior, and the environment. Why? Because these things will matter more in 30 years than who wore the cutest dress at prom.

Indigo children are also more impatient and rebellious than others.

Indigo children, if nothing else, tend to be bored with the status quo–especially if it involves enforcing social rules that are potentially harmful to others. Because they are a group that marches to the beat of their own drums, Indigos have a tendency towards rebellion and impatience.

This might be a pain for parents, but it’s important to understand why they are so outspoken and rebellious. They want to see the world become a better place, yesterday!

Your child is a non-conformist.

Typical teens and children are absolutely petrified of being the one who doesn’t fit in. Indigo children, on the other hand, take pride in being the ones who aren’t the norm in their circle of friends.

Though this can cause some social problems, the fact is that it’s a healthy sign of personal growth and confidence. Be proud in your Indigo child!

There’s a deep connection between your child and nature.

Is your child the type of kid who adores hanging out with animals or volunteering at a shelter? If you ask your kiddo about plants or wildlife, are you fairly certain they’ll know what they are talking about? If so, chances are high that your child is an Indigo baby.

Indigo children have a unique bond with nature that goes beyond the typical love of cute, cuddly animals. This is because they are gifted with an extreme sense of empathy that takes all life into consideration.

People regularly remark that your child seems “older than they really are.”

Indigo children are not your average person. They are known for being “Old Souls,” often because they have reincarnated so many times. They have learned their lessons from lives that happened long ago, and they’re now looking to spread some wisdom.

A typical Indigo child may seem jaded beyond their years. Don’t worry, this is totally normal.

It often seems like your child’s head is in the clouds.

Daydreaming and Indigo children go hand in hand. It’s part of their spiritual nature and part of their interest in the otherwordly. Dreaming away different worlds is an Indigo’s way of decompressing from the rigors of modern living.

If you notice your child regularly daydreaming or having that “far away” look in their eyes, chances are that you may have an Indigo child in the works.

Your child knows things they shouldn’t know, or remembers things that happened before they were born.

Indigo children are not your typical kiddo, especially when it comes to their intuition. Many of them are able to recall what life was like before they were born. They often remember past lives, sometimes even telling parents correct details of their family’s life prior to birth.

This talent is something that is unusually common among younger Indigo children, many of whom don’t realize that their talent isn’t the norm. If your child casually discusses past lives, it’s probably safe to say that they’re Indigo at heart.

Their intuition is crazily accurate.

Indigo children are most commonly identified after they use their intuition to reveal something surprising. Their predictions and revelations often come unprovoked and sudden, making them extremely shocking to family members who hear them.

Their predictions and insights are far from the norm. For example, Indigo children have been known to predict new pregnancies before they’re announced or tell parents jokes that relatives who passed away used to tell them.

They are extremely empathic.

Though this isn’t a very paranormal thing to casual observers, there’s no way to beat around the bush. Indigo children’s psychic abilities are marked by their deep levels of empathy and sympathy towards other living creatures.

Everyone has a little empathy, but Indigos tend to take things to a new level. A regular child might need to be coached to be kind to others or to take better care of their pets. This would never happen with an Indigo child, as they innately feel the need to care for others at an instinctual level.

Scary Games to Play with Friends at Sleepovers
Who doesn’t love scaring the crap out of their friends with a good old-fashioned spooky game? If that person is
Lucky Numbers Dream Guide for 2022
Did you have a dream and knew that it meant something important? Are you getting ready to play the lottery
Dreaming About Dead Relatives – Spiritual Significance, Interpretation & Meaning
There is no one answer to this question as dreams can be interpreted in many different ways. In some interpretations,