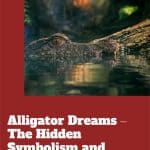 Have you been dreaming about alligators recently? If you have, you are not alone! People across the world dream of alligators and crocodiles. Instead of passing it off, let’s find the meaning behind this creature appearing while you sleep.

Alligators and crocodiles are very similar, so it is easy to get them confused. Since it’s hard to tell the difference, our brains think of them as the same. For this reason, the terms alligator and crocodile can be used to describe the same creature when talking about dreams.

If you are curious about the difference, alligators are more common in the United States. Crocodiles only live in some parts of Florida, so if you live somewhere else and dream of one, it is probably an alligator. There are some morphological differences, but if you are dreaming of the creatures, you probably won’t have time to note snout shape and body size.

An alligator can appear in your dream chasing you and being killed by you. Each of these appearances has its own meaning. Keep reading to learn more about alligator symbolization in dreams!

Dreams of Being Chased by an Alligator

One of the ways an alligator can appear in a dream is by chasing you. In this situation, the alligator symbolizes a few different things, including;

You are running from a problem:

Is there a problem in your life that you are running from? The alligator may symbolize something that you have been putting off. Throughout the day, try not to procrastinate and put anything off. This could range from a simple task at school or work, to breaking up with a significant other. When you run from a problem, others around you may suffer as well. When others are affected, the situation can become even more intense and harder to handle.

Your past is catching up to you:

An alligator chasing you could also symbolize your past catching up to you. You might have done something in the past that you have been avoiding. This event was pushed to the side and time passed, but now it is reemerging. Typically, the past event that took place isn’t very positive. For example, if you committed a crime and hid it from a job, this could be brought up and you could lose your job. The past doesn’t have to be as serious as being a criminal, but the effects could be the same.

You need to listen to your subconscious:

Most of us have that little voice in the back of our heads telling us what to do, but we don’t always listen. Sometimes, the voice will grow louder until it manifests in a dream as an alligator chasing you. Try listening to the voice during the day. If you are about to do something questionable, take a second to think about what you are doing. You can dream of an alligator chasing you if you have spent a while ignoring that voice, letting it build up in your subconscious.

Overall, if an alligator is chasing you, you are running from something. Take time throughout your day to confront and think about everything that is going on around you. Was there a situation that you could have handled better? Did you shrug someone off because you didn’t want to talk to them? Think about moments like this and try to make it better so it won’t turn into an alligator chasing you!

Sometimes, the alligator could symbolize one of the situations above, and you can’t do anything about it. It’s a bit hard to get rid of an alligator chasing you. The problems you face may be too big for you, and it may even be impossible for you to fix them. This is unfortunate but try to not let situations get this far. Act early, instead of sitting on it for a while.

Like most dreams about animals, size matters! Typically, smaller animals symbolize problems that aren’t as big. Don’t forget that small doesn’t mean less serious. A small problem could later turn into a huge problem if not handled correctly. Be sure no to ignore an alligator dream just because the creature is small.

Killing an Alligator in Your Dreams

This dream should give you a sense of confidence to overcome anything that is thrown at you. Your life should be going according to plan, with no events or people successfully messing it up.

Throughout the day, try to maintain a positive outlook and stay motivated. The dream cannot be fulfilled if you just sit around thinking ‘everything will fall into place because my dream told me’. You have to put some work in to get the desired outcome. Although you may dream of overcoming something, it does no good if you don’t care enough to do anything.

You may also dream of attempting to kill an alligator but failing. This may mean that you overcame a challenge but left some loose ends. For example, you may have a coworker who is spreading rumors. To fix the situation, you asked another coworker to tell them to stop. There might be a chance that your plea doesn’t spark anything, and they continue spreading rumors. You tried to handle it, but you approached the situation wrong.

In the Bible, an alligator symbolizes something that cannot be contained by mankind. Interestingly, the word ‘crocodile’ is used interchangeably with ‘Leviathan’. Leviathan was a giant sea monster with multiple heads. God kills Leviathan and uses its meat given to the Hebrews as food.

Essentially, it symbolizes Israel’s enemies. If you dream of an alligator, it symbolizes your enemies as well. The alligator is something to fear because it cannot be contained. The enemy could be a real person or a part of you.

Spiritually, an alligator symbolizes primal instincts. Since they cannot be contained, they embody living a life free of constraints. An alligator is fierce and confident; not effected by others around it. If you dream of them, this may be your spirit expressing the primal instincts that are within.

In ancient Egypt, crocodiles were worshipped like Gods. In fact, there is an Egyptian God named Sobek that took the form of a crocodile. Sobek was the God of the Nile and associated with fertility and ‘military prowess’. In the Bible, these creatures are feared, but Egyptians didn’t consider Sobek to be evil; he provided to the land and protected the Nile.

The alligator also has meaning in primal astrology. Primal astrology uses different animals that the Eastern counterparts combined with the western sign. For example, Capricorns born in the year of the snake are alligators.

Those who are alligators tend to be confident and aim for success while being patient and calm throughout life. You may dream of yourself as an alligator, embodying the primal astrology traits for an alligator.

Don’t take your dreams lightly! Dreaming about rare creatures as alligators should always be important. Unless you live near a swampy area or river, you don’t encounter alligators that much. This means that their appearance in your dreams is out of the ordinary.

Overall, alligators and crocodiles seem other-worldly. They tend to symbolize something wild, whether it be a giant sea monster or a situation you can’t control. Alligators are one of the few truly wild creatures on Earth, so the situations that they represent can also be wild and hard to get a hold of.

If you don’t believe in dream symbolization, you should still learn what your dreams mean. Try to interpret with an open mind. Even if dreams mean nothing, you still feel prompted to take action and control of your life. Just the thought of a dream potentially having meaning could impact you to be more aware of what is around you.

After reading this, you should know the importance of alligator dreams! Remember that everyone is different, so it makes sense that not every alligator dream is the same. Be sure to search and not take the first meaning you see as the only meaning possible. Find what is right for you!

3 thoughts on “Alligator Dreams – The Hidden Symbolism and Spiritual Meaning”

Scary Games to Play with Friends at Sleepovers
Who doesn’t love scaring the crap out of their friends with a good old-fashioned spooky game? If that person is
Lucky Numbers Dream Guide for 2022
Did you have a dream and knew that it meant something important? Are you getting ready to play the lottery
Manifesting Multiple Things at the Same Time – How to.
Can you manifest multiple things at once? If you have a few goals you’re chasing, you can achieve them by