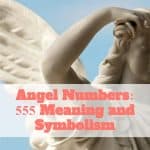 As you are going through the journey known as life, have you been noticing some repeating numbers?

Have those numbers happened to be repeating 5s?

We see numbers more often in our days than we may realize. Take a second to think about it.

Page numbers, clocks, phone numbers, addresses, lengths of the videos that you find as you’re scrolling through social media, and license plates on the vehicles you see cruising around are the tip of the iceberg when talking about where you see numbers in your daily routine.

It can be safe to say that if you see the number 5 often enough to start to take notice, there’s probably a reason for it.

There is a belief that repeating numbers are messages delivered by angels.

These messages that you release may not be entirely clear and may not seem like much at first, but there are messages in repeating numbers.

While select repeating numbers seem to be delivering messages that are more ominous in nature, receiving the messages from angels means every message is pure and with no ill intention.

With all of this in mind, what is that mystery 555 trying to tell you?

What message are the angels trying to deliver?

What do the numbers represent?

Let’s go on a journey through the power of this special angel number.

When the sight of triple 5s seems to be appearing time and time again in your life, you may want to take a second to buckle up.

If the numbers hold the magic suggested, a rapid change may be heading directly for you.

Receiving this powerful number from the angels is a message from them to warn you that the change that is coming is imminent, and there’s nothing that you’re going to be able to do to stop it.

With this vague message, if you have nothing else to go off of, the change that is coming may seem terrifying.

However, the angels’ divine nature should put you to ease as the message is delivered from them as an assurance that everything will be alright.

As you try to figure out what the message may be referring to, find peace that whatever change is coming isn’t to be feared.

While some changes may appear to be rocky at first and can come across in a negative light, keep faith in your angels and know this change will be positive with time.

What you are experiencing is a progression into the next chapter in your life and it’s always a bit disorienting when you recognize it.

While you know now that if you have a case of reoccurring 5s, you have a message from the angels, you should also know there is even more symbolism found within the number 555 itself!

A common reason you may be receiving the message is that you need to dive deeper into your spirituality.

It is either a reminder for you to continue practicing your spiritualism or encourage you to become more involved in it.

This message may come because you are at a low point in your life, perhaps every turn faces more negativity and it’s hard to stay positive.

These delivered 5s are reminding you that you are never truly alone.

If you are feeling stagnant, the number may also suggest that you need a getaway.

Angel Number 555 is known for its symbolism of freedom, growth, adventure, and change.

When you consider that the number comes as a message that changes are going to change from the Higher Realm, you really should think about following their advice (so long as it’s reasonable! The Angels will not ask for anything unreasonable).

For those who practice Christianity, angels are direct connections to God and the Messenger for Him.

Christians have a deep respect for the number 555, not only for the belief that it is a message from the angels.

The word “Christ” actually appears 555 times in the King James Version of the Bible.

This connection adds power to the number, increasing its divinity.

In the verses, it is written that Jesus comes across a town where 5000 people have gathered to see him.

When he wanted to feed the crowd, he was told they only had 5 loaves of bread and 2 fish.

Despite their low amount of food, they fed all 5000 people.

If you feel that your case of repeating 5s is related to your love life, it may be hard to have a calm mindset about what exactly it wants to tell you.

The first thing you must do is self-reflect on your romantic life and whatever the situation may be for you.

Are you single? Married? Just started dating? A year in?

Every situation is unique, just as the person who is in it is unique. Consider you, your spirit, and the energies that you have been putting off into the world.

If you have a partner or a love interest, consider the energies they cast into the world. As well.

If you are single and feel as if you have found yourself in positive energies, these 555 messages may be indicating that you may be meeting someone soon, or perhaps a spark will fly somewhere.

If you feel as if the world has been throwing negative energies at you, you are making it over the peak of your uphill battle. You can proceed, but with caution.

While you may think it is a change in your love life, it could be that peak into easier times blocked by the “change in love life,” potentially keeping you stagnant.

If you have found yourself in a relatively new relationship and aren’t quite “super serious,” these messages could be telling you that things are going well and looking good and telling you to progress.

Perhaps you bickered with your partner and are both stubbornly angry at each other; the 555 could represent the need to take action to fix the problem.

On the contrary, it could also be telling you to take action if you’ve been noticing more and more negative energy.

If you feel as if something is horribly wrong in your relationship, this may be an indication from the angels that you should take action to end it before it gets too serious.

If you are in a serious or long-term relationship, seeing 555 messages from the angels can feel great if you are on smooth sailing.

If the connection is flowing well still as you’ve grown up together, you are a part of the lucky group, after all.

If you have had an argument with your spouse/partner recently, this could be a sign that you need to mend your relationship and the rift, no matter how small it may seem.

However, again, if you are beginning to find yourself losing your breath under the pressure of your relationship, it may be a sign to take action to remove yourself from the situation, whether only for a short period or permanently.

What Does The Number 5 Represent in Numerology?

The number 5 alone holds incredible powers that go beyond what we may be able to comprehend at a glance.

When you see 5s, they could be symbolizing positive things.

Having better stability for yourself is always appreciated, and that is what the 5 can represent at times or it could express a curiosity for something.

There are a lot of our physical elements that are composed of 5 as well.

Think about the general features for people! Human beings generally have 5 fingers on each hand and 5 toes on each foot. We have 5 senses that allow us to interact with the physical world around us.

Due to its connectivity to our way of living, 5 represents the ever-changing state of our planet and everything on it.

As everything in this realm changes constantly, there are bound to be negative aspects to this number as well.

The number 5 can also represent things such as the fear of change. You could be holding yourself back from something because you are afraid of what is on the other side.

This could cause a self-caused stagnation and the number 5 may be encouraging you to take action and finally go through that door.

However, 5 can also represent things such as impulsive decisions and irresponsibility. It is up to you to spend time self-reflecting in order to make the right decisions.

The angels and your intuition are never trying to steer into danger.

The Angel Number 555 holds a lot of symbolism, meaning, and stories within the casing of its exterior. With the message coming from an angel, they are telling you this message with pure intentions.

However, it is you who has to decipher what that message is telling you precisely. The difference between a message of continuing and a message of a change is one misunderstanding.

Be sure to always practice your spirituality when you have the time to keep your spirit healthy.

The healthier a connection you have with your spirituality, the more likely you will correctly interpret the message you are being delivered.

Whatever the message is about is based on the unique situation you are experiencing, and it is up to you to understand what your angels may be trying to tell you.

Whatever your belief or experiences, there is power to everything that has power given to it. If Angel Number 555 means something to you, it is more likely for you to experience something connected to it.

With this information, go forth and practice your spirituality. You have an energy that is unique to you, and you can apply it wherever you please. Believe in your power.

Scary Games to Play with Friends at Sleepovers
Who doesn’t love scaring the crap out of their friends with a good old-fashioned spooky game? If that person is
Lucky Numbers Dream Guide for 2022
Did you have a dream and knew that it meant something important? Are you getting ready to play the lottery
Spiritual Meaning Of Colors In Dreams: How To Interpret Your Dreams
Different colors can symbolize different things in dreams. For example, black can symbolize power, red can symbolize passion, and green