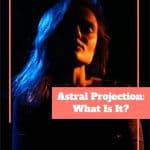 What Is Astral Projection?

Have you ever had an OBE, better known as an out-of-body experience? If you have, was it intentional or unintentional? For some, having an OBE is something they can do as they please, or so it is claimed. While “astral projection” may sound like something straight out of a Sci-Fi film, this experience has been mentioned in some way for centuries now.

Astral projection, or other forms of OBE, have been recorded by many cultures across the world in our planet’s history. Even with the recordings of these events, though, there doesn’t seem to be much of a paper trail left behind for astral projection specifically, so it isn’t known when the term was first coined.

Currently, astral projection is categorized as a pseudoscience and the definition of these phenomena varies depending on the individual you ask. Some may define astral projection as “non-physical travel through the physical world.” Others will say it is “a realm or plane where spirits, demons, and angels reside.” Today, 8 to 20 percent of people say that they have had an OBE experience, but the percentage of those who have astral projected is probably much lower. The difference between astral projection and other OBE phenomena is astral projections are intentional while most OBE are not.

As you wonder this question, take a moment to think about it on your own. The authenticity of some topics is something that is hard to validate in science, with astral projection being one of those topics. Despite attempts to do so, scientists do not have any tool that is able to track one’s non-physical form. This obstruction is what ultimately led to astral projection being categorized as it is.

Every person has their own abilities and talents, along with their own individual energy that defines who they are as a person, even outside their body. The energy that a person has stays with them long after death, which we can see when we note paranormal encounters. New scientific measures are also being tested and employed every day, with the inventions at times changing what we once considered fact. Who knows what time could tell us about astral projection?

It can be said that in order to astral project, you must have an impeccable discipline of your mind and the energy that you are composed of. Astral projection is not something that you can do accidentally, as astral projection is classified as an intentional out-of-body experience. Due to this, there do not seem to be any indications from individuals who have successfully astral projected that this is a dangerous experience. When astral projecting, it is your energy, the energy that resides in your physical body to power you through the day you are projecting with. Your energy reacts to the world around it so that the energy is able to merge with the astral plane rather than just power your physical form.

For many, the physical body is hard to master, as you may get one skill down, but you may never learn another that you are capable of doing. The physical world around limits us and the experiences we can have by placing other physical obstacles in our path. Your mind is a tool that you can work from the moment you are born, meaning it is something that you have more time to work on mastering. Consider this, it is going to be way more comfortable if you’ve been skiing for five years versus if you’ve been skiing for five days.

If you are considering practicing astral projection with no prior experience with similar experiences such as meditating, lucid dreaming, and shifting reality, you may want to proceed with caution. While the experience itself is not dangerous, you may find the whole process a little scary in the very beginning if you don’t know what to expect. This fear could cause damages that are more emotional if you do not prepare yourself.

Astral Projection: In The Media

This isn’t the only media that depicts astral projection in a bad light, as you can also find astral projection being referenced in the Chilling Adventures of Sabrina Netflix series. The episodes involving astral projection show the astral plane in a similar light that Insidious does, making it a place where spirits and other paranormal entities, such as psychopomps that lead the dead to the afterlife, reside. If you are there for an extended period of time, it is dangerous, as the psychopomps will either try to take you to the afterlife, or they will alert a higher power.

There are also good depictions (or better depictions) of astral projection in the media, however, which can be seen in TV shows such as Stranger Things and Legend of Korra. Legend of Korra is an animated show that is a sequel to the older animated show, Avatar: The Last Airbender, leading us through adventures with Aang’s successor Korra. In the show, there are depictions of astral projection as a specialized ability used by Airbender. This special ability allows them to travel around the world without their bodies, using their energy and spirit to move across the lands and seas.

Stranger Things also depicts astral projection as a way of traveling the physical world without physical means. It can be seen in an episode of Season 3 when Eleven goes to visit other children who were experimented on. One of the children, now grown into either a teen or young adult, has the ability to astral project. Their astral projection ability allows them to see what lies behind the wall of a building without being noticed.

If astral projecting was an easy thing to do, more people would be claiming that they have done it, but astral projection is an ability that not everyone may possess. Everybody contains a different energy and the way that your energy interacts with the energies of the world around makes you unique. Like the uniqueness of every person in their physical form, this uniqueness defines each person and their talents, abilities, and how they learn each of these. As in the physical realm, some people are going to be naturally better at astral projecting than others.

While it is not sure whether or not astral projection is a gift only for select people or if it is something that can be learned over time, training yourself in the discipline required for astral projection is bound to be beneficial. You will slowly strengthen the control you have over the energy you possess and you may have more peace of mind. It is only when you have achieved this discipline of your mind and energy that you may be able to travel into the astral realm.

If you want to attempt astral projection for yourself, as stated before, proceed with caution just as you would with anything you are brand new in. While it is not guaranteed that you will ever achieve astral projection, the practice you undergo will benefit you in the same way meditation would. The focus you need to have allows for you to clear your head, which may help you in other ways.

The world is impossibly huge and it feels we may never have the time to see all of the beauty of this planet and the space it resides in. Whether you want to take a trip around the globe or simply want to know if you have the ability, astral projection just may be possible for you. Focus your energy and expand yourself; you may be surprised by the magic you have.

Scary Games to Play with Friends at Sleepovers
Who doesn’t love scaring the crap out of their friends with a good old-fashioned spooky game? If that person is
Lucky Numbers Dream Guide for 2022
Did you have a dream and knew that it meant something important? Are you getting ready to play the lottery
Pink Aura Meaning & Personality Traits
You may have heard people talking about your aura before, but were unsure what they meant. The idea of auras