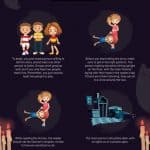 I remember playing a number of scary games growing up, such as “Light as a feather, stiff as a board”, “Bloody Mary” and the “Sandman Game. But one of my favorites was playing the “Cat Scratch Game”.

Have you ever played the cat scratch game? If not, you can learn all about it here!

This game is usually played at sleepovers with children, but anyone can play it. The game involves telling scary stories of a cat, with the cat eventually scratching someone who is participating.

Maybe you’ll be inspired to play this game with some of your friends!

Remember to take all this with a grain of salt.

It’s totally okay to not believe in scary games like this, but regardless of your beliefs, they are still fun! Grab some friends, turn off the lights, and start playing the cat scratch game today.

Like most games that are played by children, it is hard to find the origin of the cat scratch game.

Essentially, through this game, you are summoning a presence. This can seem fun and exciting, but many people think this is dangerous.

Don’t play this game if you feel like there is already a negative presence around you.

The cat scratch game could draw it out, which is definitely not good.

A creepypasta is basically a scary/horror legend that is spread around the internet. Often, the legend or story is shared based on a real experience.

If you aren’t fully understanding what a creepypasta is, just know that Slender Man was born from this.

The legends around Slender Man originated online, with no evidence in history or literature. Many people believe in Slender Man, even if he started as just an internet story.

Having roots on the internet does not mean that these stories are untrue though.

Overall, it is up to you to decide what is real or not. Whether you are spiritual or not, you should give the cat scratch game a try to see if it really works.

How to Play The Cat Scratch Game (Instructions):

Surprisingly, the game is incredibly simple to play.

Although it’s not required, you can use candles to set a ‘scary’ mood. Pillows can also be used to make sitting on the floor a bit easier.

Below are the stories that you should recite while playing this game:

Read them over in your head and make sure you don’t mess up while reading.

It’s okay to read from a paper or phone but try not to sound like a robot while reading.

Scary Story One (the most common story recited during the game):

There once was an old lady who owned a cat.

The cat was very nice.

It meowed and purred.

The old lady got a new cat.

The cat was very mean.

It hissed and clawed.

The old lady decided not to get any more cats.

You are walking through a dark alley late at night.

You are the only one there.

The ground is slick with rain.

The alley is filled with garbage cans and litter.

But then you hear something.

A movement in the garbage cans.

You pick up your pace.

You want to get out of the alley fast.

But then you see something.

They are the eyes of an enormous cat.

You run, but the cat chases you and jumps on you.

It scratches you, one, two, three.

After reciting the stories correctly, the listener should have scratch marks on their back. If there are no visible scratches, try playing the game with a different reader.

Don’t give up though! Another reader may successfully make scratches appear on the listeners back.

There is no real harm from the scratches. You do not have to be worried about the scratches lasting or even leaving a scar. The scratches will fade and vanish quickly, so there is nothing to worry about.

Since the cat scratch game was born on the internet, there are plenty of real-life accounts to look at.

If you are interested in a video, this one that we put together about the game:

There are also plenty of real accounts on Reddit. Here is a very long and in-depth post about a Reddit user’s experience with the cat scratch game.

Different websites that post about the game also contain real-life accounts as well. Sometimes, comments will contain accounts of people who tried the game after reading the article.

Communicating with a cat spirit sounds interesting, so be sure to give this game a try. Even if you don’t believe in spirits and spooky stories like this, it is still fun to play with friends. Go into the game with an open mind and don’t forget to have a good time.

Scary Games to Play with Friends at Sleepovers
Who doesn’t love scaring the crap out of their friends with a good old-fashioned spooky game? If that person is
Lucky Numbers Dream Guide for 2022
Did you have a dream and knew that it meant something important? Are you getting ready to play the lottery
What Is A Medium? How Are They Different From Psychics?
When people first start getting interested in the paranormal or the unknown, one of the first people they’ll meet is