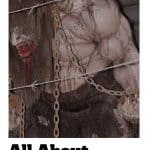 People around the world have told stories of terrifying monsters in the woods, and among Native American tribes, those tales are taken as facts. One of the most worrying stories traded among the Algonquian tribe is about a creature known as the wendigo.

Wendigos are considered to be some of the most despicable monsters in the Great Lakes. Though their legend has changed over the years, many of their main characteristics are fairly steady–and sightings of them continue to roll in despite the legend’s obscurity.

What Is A Wendigo?

A wendigo, initially, was considered an evil spirit that appeared like a mix between a human and an animal. This spirit had the power to possess people and cause people to do acts that involved unspeakable levels of greed, lust, and hunger.

As the legend progressed, the creature began to be characterized by its physical being. So, it is part spirit, part monster–all depending on how it chooses to manifest.

What Do Wendigos Do?

Wendigos do anything that tends to embody wanton hunger, violence, and greed. They have an unending thirst for human flesh that keeps them on the hunt for people at all times. Whenever they see a lone person, they do everything they can to hunt them down and eat them.

They also have a certain level of general malice towards anything human or beneficial to humankind. That’s often why they possess people and drive them to commit horrific crimes involving murder and cannibalism. They are also fond of driving people to wantonly destroy local environments as a way to encourage famine among humanity.

What Do Wendigos Eat?

What Happens If A Wendigo Can’t Eat People?

Though wendigos can eat other animals, other animals are not their primary focus. Humans are, and there’s good reason for this. Wendigos need human flesh in order to survive. If they go too long without killing someone, they die.

How Long Can A Wendigo Survive Without Human Flesh?

No one knows, since they are capable of going into hibernation for months or even years.

Where Are Wendigos Found?

Wendigo sightings are generally relegated to the northern parts of the American Midwest and southern parts of Canada. The Cree, Algonquian, and Ojibwe tribe territories are where they are most likely to be spotted.

When Do Wendigos Hibernate?

Though there have been sightings of wendigos during the summer, this is actually a season when they seem to be more scarce. Since their most active times are during the winter and fall seasons, it’s can be assumed that they hibernate during the summer months if food supplies are low.

Why Are Wendigos Associated With Cold Weather?

It’s believed that the close ties wendigos have to cold weather deals with the way that wendigos come into being. Because most wendigos started off as humans who resorted to cannibalism to survive winter famines, the tie to winter never really left.

Wendigos are often called “beings of ice” due to their cold-hearted nature and origins. Who’s to say that there isn’t some truth in this nickname?

How Is A Wendigo Created?

Believe it or not, Native American legends claim that wendigos were once human–just like you or me. According to folklore, wendigos are people who committed acts of cannibalism during famines. The moment a human turns to cannibalism to survive, they seal their fate as a wendigo.

Wendigos are said to be cursed for their actions, often by shamans of the village, after their actions are discovered. The longer that wendigos deal with their curse, the less human they become.

Can Wendigos Create Other Wendigos?

Legend suggests that a wendigo that possesses someone will eventually turn that person into a wendigo as well. So, to a point, wendigos can turn others into wendigos.

However, there are a lot of caveats to this. Sometimes, possession is only temporary and the person is able to keep their humanity after the fact. It’s also worth pointing out that most people have the power to fight the possession through selfless deeds.

What Would Make Someone Likely To Become Possessed By A Wendigo?

It’s important to remember the overall theme of wendigos. They are beings that are all about greed and rage. They don’t just embody this vibe, either. They’re attracted to it and often will use their powers to exacerbate it.

People who are at the highest risk of possession are people who are unusually greedy, gluttonous, or envious of their neighbors. People who spend excessive time in snow and cold areas are also more prone to wendigo possession.

What Is Wendigo Psychosis?

Wendigo psychosis is a mental illness that is associated with wendigo possession, and there have been multiple cases reported in the Ontario area. It’s a syndrome characterized by temporary insanity that leads people to commit acts of murder, cannibalism, and environmental destruction.

Much like wendigos, people who have wendigo psychosis never stop being hungry when afflicted with the illness. Most people who have this form of psychosis can only be stopped from a killing spree by being killed.

That being said, there have been survivors. One man had a bout of wendigo psychosis while he was traveling on a bus in 2008. The man who had a bout of this psychosis snapped, stabbed passenger Tim McLean repeatedly and then started consuming his flesh. He was found not guilty due to insanity.

Wendigos are often described as tall, emaciated beings that have greyish skin, long claws, and black eyes. They often look like disinterred bodies and lack lips and toes. Recently, some witnesses claim that wendigos also have features similar to animals–most often deer or wolves.

One of the aspects of the wendigo legend deals with their growth. It’s said that whenever a wendigo eats, it grows so that its body matches what it ate. Because it can never be full, it gets hungrier every time they eat someone. This feeds into their unending hunger.

How Do Wendigos Hunt?

A wendigo’s hunger is only matched by its hunting skill, which is legendary. Like real predators, wendigos will stalk people in the woods and then attack them. They have extreme speed, strength, and endurance.

If a wendigo decides to hunt you, they will stalk you and possibly try to lure you deeper into the woods. When it decides to finally catch you, it will shred you to pieces and eat every last bit of you. That’s why no one ever sees a wendigo victim’s body.

Can You Escape From A Wendigo?

The jury is still out on that. Some claim escape is impossible once a wendigo spots you. Others claim that you can do it as long as you head indoors or find your way out of the forest in time. For the most part, wendigos only seem to strike when there is only one person nearby.

It’s generally accepted that being targeted by a wendigo is a death sentence. The only real way to escape a wendigo is to see it before it sees you and to run as soon as you see it.

Can You Kill A Wendigo?

Perhaps the most alarming thing about wendigos is that you cannot kill them. Bullets do not harm them and there are no protective spells you can use to get rid of one. They are considered to be ethereal creatures, so duking it out will not work.

5 thoughts on “All About Wendigos”

Scary Games to Play with Friends at Sleepovers
Who doesn’t love scaring the crap out of their friends with a good old-fashioned spooky game? If that person is
Lucky Numbers Dream Guide for 2022
Did you have a dream and knew that it meant something important? Are you getting ready to play the lottery
27 Manifestation Techniques to Help You Achieve Your Dreams
Conquer your goals and achieve your dream life with 27 methods for manifestation. Finding the best technique for your journey