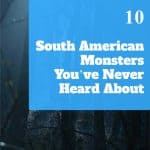 There’s something incredibly captivating about learning about monsters and legends from faraway lands. Each continent tends to have its own “flavor” to legends, ghosts, and ghouls. In South America, it’s fairly common to see locals believe in local monsters—even going so far as to modify their daily lives to avoid them.

It’s easy to see why the beliefs are still alive. South Americans regularly claim to see their mythical creatures, and once in a while, foreigners see them too. If you hit South America, be careful. You might run into one of these obscure monsters, if you’re unlucky.

El Sombreron is a Guatemalan creature who is known for being a stylish dude. He wears a large sombrero, black clothes, and excellent accessories. He’s a fan of braiding the manes and tails of horses. Sounds great, right?

Well, not really. He’s a short goblin-like man who steals women away by serenading them with a silver guitar. Once women follow him, he feeds them dirt so they can’t sleep…and they’re never seen again.

For the most part, he’s easy to lure away. All you have to do is keep your hair short.

If you speak Spanish, you might already know that luz mala translates into “bad light.” Rumor has it that this strange sentient light appears at night to people who are still wandering outside. The light is said to be the glow of lost souls, but no one knows what it is for sure.

Those who see the luz mala are often stricken with dread. If they look under the light, they may find indigenous peoples’ treasures. However, if they look at the light itself, the treasures will emit a deadly gas that kills them before they even know what happened.

This legend is an old one, dating back to the Conquistadors. The Spanish invaders believed that a glowing green light indicated where the natives buried their goods. Perhaps the natives decided to fight back?

El Cuero is a strange cryptid said to resemble a stingray or a piece of floating leather, which is why its name translates into “the leather.” It has eyes on stalks, a whip-like tail, an extendable mouth, and claws on the outside of its flat body. So, it looks like a mix between a giant slug, a sting ray, and a xenomorph.

This cryptid is regularly seen in Lake Lacar, and locals are terrified of it. They call it an “aquatic tiger,” noting that it’s very hostile towards humans. As a result, people avoid the lake at all costs.

Perhaps the most well-known cryptid on this list, duendes are a small type of gnome that can often be seen in homes and fields throughout Mexico and South America. This myth started in Spain, but quickly found a home in South America due to the Conquistadors.

Believe it or not, sightings of duendes are fairly common. Most view them as fairyfolk who tend to wreak havoc on humans, often appearing in front of children to scare them. That being said, some believe them to be good, and just believe their antics are mischievous.

Out of all the creatures rumored to exist in South America’s Amazon Basin, the megaconda is the most likely to be real. As the name suggests, this is an absolutely massive species of yet-undiscovered anaconda.

Shockingly, both scientists and locals have claimed to see outlines of a large snake swimming in the waters. People have estimated its size to be between 25 to 100 feet. Many also believe they eat people, but no one knows for sure.

Humanity has yet to capture one or find evidence of one alive, or at least, that’s what we know. Explorer Percy Fawcett claimed to kill a megaconda that measured 63 feet in length. However, the body was never found.

Almost every culture has a tale of a ghostly woman who tempts men to their deaths, and in the Dominican Republic, her name is la ciguapa. She’s a mesmerizing, pretty woman who loves to lure men into the woods and make them disappear for good.

She looks great and totally normal until you realize her feet are backward. Some believe she’s the spirit of a betrayed woman. Others believe she’s a demonic force. Whatever it is, you might want to avoid going into the woods with strange women while in South America.

Brazil’s Minhocão might be the only cryptid that could be confused for a megaconda. That’s because this strange cryptid is a giant earthworm. Sightings have placed this burrowing monster’s size between 75 to 150 feet, and witnesses also claim it can swim in water.

If you hate worms, you’re in luck. There have been no sightings of this beast for over 150 years, so you’re probably safe.

The Evil Bird of Peru

If you’ve ever heard of the Mothman’s reputation for being a hardbringer of death, then this might scare you a bit. Somehow, thousands of miles away, Peruvian natives have a similar story of an “evil bird” that foretells death by simply showing up.

The bird is described as a massive black bird with glowing red eyes. It’s said that people who witness the bird will see tragedy, and if the bird lands on your roof, you’ll die. This bird is only seen or heard at night, so you’re alright during the day.

This isn’t too much unlike Mexico’s lechuza, an owl-woman monster that is also described as a massive black bird that flies around at night. Much like the Evil Bird, la lechuza is said to be an omen of death and tragedy to those who see her.

In the United States, we have terrifying tales of the Headless Horseman of Sleepy Hollow. In Brazil, they wanted to kick things up a notch. There, they have a legend about a headless ghost mule that has a blazing fire where its head should be.

According to the legend, this mule was once a beautiful young woman who tempted a priest. After she and her priestly lover consummated their affair, God condemned her to live her afterlife as a headless mule that roams through city streets.

At night, she lets out wild shrieks and kicks anyone near her into the afterlife. If you run into her, cover your eyes and fingers! She’s said to enjoy eating them and will eat the rest of you if you get too close.

It’s a horrible curse, isn’t it? Well, God was somewhat merciful. During the day, this cursed being reverts back to being human. The mula has no idea or recollection of what happened the night before.

Perhaps one of the stranger cryptids said to lurk in South America also happens to be one of the more modern ones on this list. For the past 10 to 20 years, people have reported seeing flying humanoids hovering throughout Mexico and parts of South America. Stranger still, there are videos of them online.

All the humanoids appear to be hunched over, wearing a robe, with no natural means of propulsion to be seen. So, who are they? We might never know.

Scary Games to Play with Friends at Sleepovers
Who doesn’t love scaring the crap out of their friends with a good old-fashioned spooky game? If that person is
Lucky Numbers Dream Guide for 2022
Did you have a dream and knew that it meant something important? Are you getting ready to play the lottery
White Sage: What It Is And How To Use It
It’s become a cliche among spiritual groups. Whenever something negative happens or bad vibes are detected, without a doubt, at