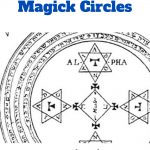 One of the most important parts of any spell or ritual is knowing how to safely and appropriately cast a magick circle. Being able to cast an effective magick circle is one of the foundations of most every pagan practice. This article will inform you all about why they are important and the best way to cast them.

The ironic part about magick circles is that they are often one of the first things taught to new pagans even though the concept can get incredibly complex. Don’t worry, we’ll break it down for you.

What Exactly is a Magick Circle?

To start with, let’s go back to basics.

A magick circle is essentially a temporary sacred space that acts as an invisible boundary between the physical world and the magickal one. While it may be marked out physically, the boundary is a psychic one, made of energy. People who are sensitive to energy often say they are able to “feel” the circle psychically.

Circles are usually cast by the practitioner or practitioners prior to any magickal work being done, and are taken down (or released) after it is finished.

Why Do We Use Them?

At its core, a magickal circle is about protection and boundaries. It works in two ways – from the outside and from the inside.

The circle’s outer barrier protects the practitioner from outside influences while they are at their most vulnerable. This can be both physically as well as psychically.

Its inner barrier also stops the magick from getting out. This is for the protection of those outside the circle, but it also helps keep the magick around longer so that it can be gathered up and used.

However, the act of casting the circle can also put the practitioner into the mindset needed for successful work.

Are Circles Required For Spellwork?

The short answer is no, they are not “required” for a successful spell or ritual. In fact, some traditions (like the Norse and Egyptians) do all of their work without casting a circle.

Circle casting is much more of a Western tradition. And even then, not even pagan casts a circle every time. Many of them only cast circles when they feel the need for extra protection and power.

What’s The Best Way To Cast a Magick Circle?

This really is a trick question, because there are as many ways to cast a magick circle as there are people who cast them. There really is no “best” way, but there are a few good practices and tips to be aware of.

While some people choose to use ritual tools to cast their circle, it’s not a requirement. In fact, it’s not even required that you speak out loud. The only thing that is an absolute necessity to do when opening your circle is to believe that it is real.

You’ll start by figuring out the right space to cast your circle. Circles can be as big or small as you want, but are generally between 5 and 9 feet in circumference. They should be cast on as flat a surface as possible and always in a place where you are sure you won’t be disturbed.

You’ll also want to know your cardinal directions (North, East, South, and West). If you’re not sure, use a compass. There are also smartphone apps that you can use if you don’t have access to a compass.

Many people choose to put a physical representation of each of the elements – earth in the North, air in the East, fire in the South, and water in the West. Here are a few options but follow whatever feels right to you.

Start by standing in the center of the circle, facing the East. Take a few deep breaths to calm and center yourself. When you feel ready, feel the wind blowing against you and get in touch with the element of air. Some people choose to speak a few words here, like “I invoke you, spirits of the East” or “I call on you, spirits of the Air.”

Turn now to the South. Calm and center yourself once again, then start to feel the heat of a flame and the element of fire. If you’d like, speak whatever words feel right.

Move on to the West. Calm, center, and invoke the element of water in whatever way you choose.

Finally, face the North. Once calm and centered, feel the earth under your feet and invoke the element. As you stand there, feeling the ground beneath your feet, envision the circle reaching deep down into the ground. Call to Mother Earth in whatever way feels right to you.

Finally, extend the circle up above your head and into the sky. As it reaches up, feel some of that golden, warm, heavenly light coming back down and into your body. Invoke Father Sky in the same you called to Mother Earth.

Then simply stand and feel the safety of the circle around you. Thank the elements as well as Mother Earth and Father Sky. You are now ready to begin any rituals or spellwork you have planned!

Should It Feel Different Inside The Circle?

This is really unique to each individual, depending on how sensitive they are to psychic energy.

Some people report nothing different, but they are few and far between. The majority of people describe a variety of different physical and emotional sensations… like the hair on their arms standing up or a feeling of being warm and safe. Occasionally people can actually see the circle out of the corner of their eyes. This often comes with practice, though, so don’t feel bad if it doesn’t happen for you right away or even at all.

What About Taking It Down?

Equally as important as casting the circle is taking it down after the magickal workings are over. The terminology for this process can vary, with some people calling it “opening” it and others calling it “closing” it. For our purposes, we’ll call it closing the circle.

When we close the circle, we allow the energy build up inside it to dissipate and the area it was opened on return to its normal, non-magickal state. There are different ways that people choose to close them, and it may be a good idea to play around with a few of them until you find one that just sits right with your practice. It can be as easy as ringing a bell or just visualizing the circle dissolving.

A good general rule of thumb, though, is using a similar strategy to closing the circle as you used to open it. Some people will choose to just reverse the casting ritual.

The reason this is important is not necessarily for safety, but because closing the circle is a great way to really send your intentions out into the world. Some people do believe that an open circle does allow an opportunity for negative energy and other unwanted entities to enter into our world.

Circle casting can be a powerful way to enhance power and provide protection during spellwork. However, that doesn’t mean it is essential to successful magick. Decide for yourself whether you think this is an important addition to your practice, and try a few different ways of circle casting to find one that really works for you. Good luck and blessed be!

Scary Games to Play with Friends at Sleepovers
Who doesn’t love scaring the crap out of their friends with a good old-fashioned spooky game? If that person is
Lucky Numbers Dream Guide for 2022
Did you have a dream and knew that it meant something important? Are you getting ready to play the lottery
Types of Dreams: What Are They?
Depending upon the content, dreams can strike us with their peculiarity, or sometimes even their alarming nature. Some dreams haunt