While Paranormal Research has been around since the 1800s, it wasn’t until recently that an everyday person like you or I could get access to the equipment needed to track down spirits.

As the activity has grown more and more popular over the last 20 years, the cost of this equipment has risen accordingly.

You could drop hundreds of dollars online ordering tools like audio monitoring equipment, infrared sensors, and physical spirit boxes, but how would you know that what you’re getting is going to produce any actual results?

While the risk may pay off in the long run, it also may leave you with an empty bank account and no spirits to be found.

Luckily, technology has kept up with the high demands of amateur ghost hunters. Both Android and iPhone app stores have an absolute plethora of spirit box apps that come at affordable prices (or even better, free!) so you can start tracking down spirits immediately.

What is a Spirit Box?

By disabling the part of the radio that stops when you hit a particular frequency, the Spirit Boxes would continually jump from station to station, frequency to frequency, only picking up small bits and pieces of each one.

Those wishing to communicate with the spirits would then set up a recording device to pick up this collection of what was seemingly just white noise.

The goal of this was to pick up on the Electronic Voice Phenomena (EVP), which is the belief that ghosts and spirits are able to communicate from the beyond over a series of intermittent wavelengths and frequencies.

Spirit Hunters would playback their recorded audio and scan it meticulously for any words, phrases, or messages that they thought could have been transmitted from the spirits. 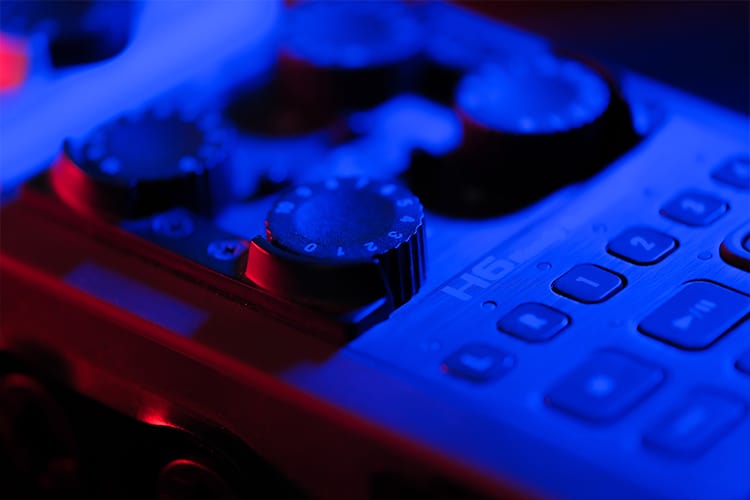 Now, you can get all of this equipment downloaded directly to your phone.

We know that spirits may be able to interact with our technology – think of the flickering lights of a haunted house or the TV in Poltergeist – so it makes sense that smartphones would be the next logical tool to use in order to communicate with the beyond.

Many of these apps include features that go above and beyond the functions of a normal spirit box, with things such as EVP recorders and night vision cameras adding to your overall experience.

However, because nobody can ever be entirely sure about the existence of spirits (let alone the best way to contact them) all of these apps come with a clause stating that they cannot guarantee results.

Some of these are meant for fun or shock value, while others have been built using the real hardware that is built into all smartphones. Regardless, let’s get into it and take a look at some of the best Spirit Box apps that you can download in 2019. 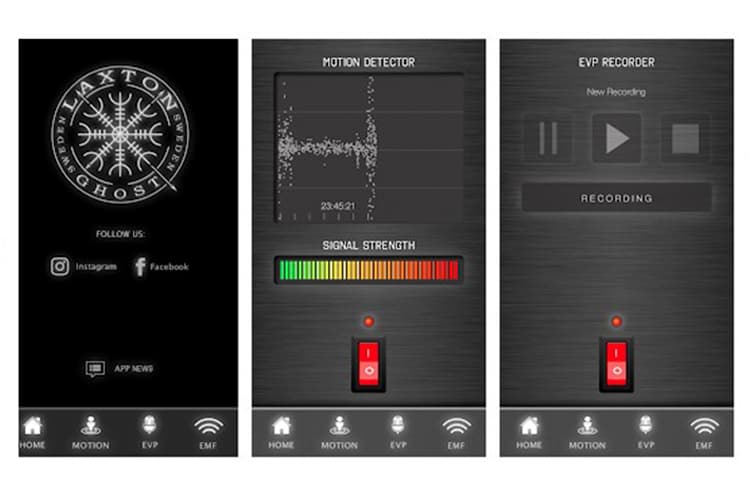 Created by brothers Tony Martinsson and Niclas Laaksonen – Sweden’s most popular ghost hunting duo – this 3-in-1 ghost tracking app is known for basing its data off of real sensor readings coming from your smartphone.

For any skeptics out there, this may be the best kind of Spirit Box to use; instead of trying to spook users or provide something gimmicky, Martinsson and Laaksonen have taken the time to do real paranormal research and want to give their users a genuine experience.

The app includes an Electro Magnetic Field (EMF) detector along with a Motion Detector and Ghost EVP Recorder – all tools that give you a greater chance of succeeding in your ghost hunting quests.

Unlike many Spirit Box apps, there are no in-app sound effects – the app simply records things as seen and heard through your smartphone.

While you won’t be able to pick up the same level of paranormal activity as you may be able to with physical spirit hunting equipment, the sensors in your phone are still able to pick up and record signals in the space around you.

At $2.99, the Ghost Tracker app is certainly a bargain when compared to other paranormal equipment. It has been updated as recently as August of 2019 in order to guarantee the greatest accuracy possible. The app is available on both iPhone and Android. 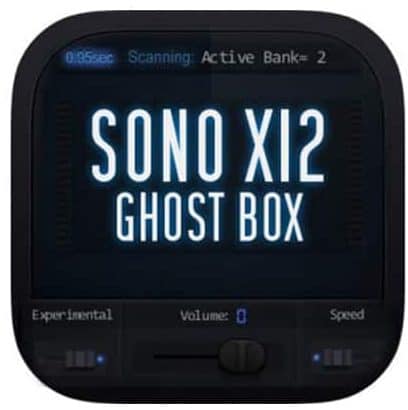 Designed to be utilized by amateurs and professionals alike, the SonoX10 Spirit Box app comes with a built-in sound bank of noises.

This means that instead of picking up on frequencies out in the world where spirits may be communicating, the SonoX10 presents spirits with a plethora of letters, phonemes, and phrases from which to choose.

Whenever a particular mobile sensor is triggered, the app will make a note of it and flag it in the sound bank for later.

After asking enough questions and attempting to converse with spirits, you should be able to collect enough of these small little fragments of sound to be able to go back and piece them all together.

These sounds may create words or even full sentences and are believed to be the efforts of the spirits attempting to answer our questions or otherwise reach out to us through our technology.

The SonoX10 is compatible with Iphone’s iOS 8 or later, while the SonoX12 is the same exact concept, but made for Android phones.

This highly rated, iPhone specific Ghost Hunting app comes with not one, not two, but five tools to help you track spirits and the paranormal at any time.

Like similar Spirit Box apps, it contains an EMF Detector and an EVP recorder (for basic spirit box functions) while also including a Vibration Detector, Power Detector, and something sinister-sounding called “The Interrogator.”

Utilizing a sleek app interface, you can choose from any of the five options straight from the home screen.

The Vibration Detector is similar to a seismograph and is designed to assist with any shaking objects that may be inhabited by spirits, while the Power Detector is meant to coax various entities into revealing their true strength.

The Interrogator, meanwhile, will assist in asking questions to (and getting answers from) spirits and ghosts. 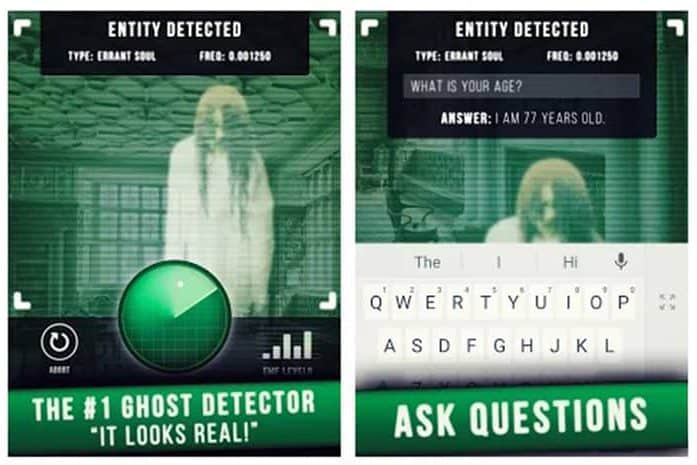 Branding itself as “The Ultimate Ghost App,” Ghost Detector+ may not help you speak to any entities living in your home, but it will definitely help you to brush up on all of your ghost knowledge.

The app includes hundreds of real-life ghost stories that are updated every day, along with the histories of famous hauntings and a game that tries to get you to determine whether ghost photos are real or fake.

For even more access to their critical ghost content, they have a subscription service for about $5 per month that will provide you with more tools than you’ll know what to do with.

Reviewers say that the app’s actual “ghost detector” service leaves more than a little to be desired, but others claim that it’s actually helped them to get in contact with those on the other side.

With over 85% positive reviews in the app store, Ghost Science M3 may just be the most comprehensive Spirit Box app on this list.

Available on both iPhone and Android, don’t let the complicated layout fool you – it may seem like you need a Ph.D. to figure out how to operate it, but the developers assure that it’s meant for both pro and amateur paranormal researchers.

Apart from the (now standard) Spirit Box and EMF features, this app includes a barometer to detect subtle atmospheric changes that may indicate a spirit is nearby, as well as a Geoscope Instrument to pick up incredibly tiny movements and vibrations that you may not otherwise notice.

There’s also a feature that amplifies the images from your smartphone camera (similar to night vision) so that you may conduct your paranormal research in extremely low lighting.

Many reviewers note that this app may be the closest you can get to actual Spirit Box gear without ever having to buy anything at all! 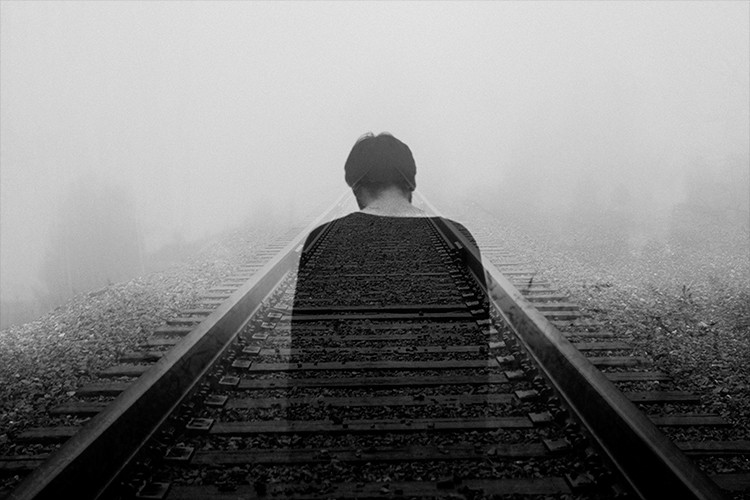 Sometimes, the scariest things aren’t the paranormal – they’re normal, everyday risks. If you believe that you’re experiencing legitimate paranormal activity, a good first step is to use something akin to the Ghost Tracker App’s EMF scanner.

Occasionally, when people are exposed to high levels of Electro-Magnetic energy, it can make them hallucinate or feel as though someone or something is watching them when in reality it’s just overexposure.

It’s important to take these risks seriously and to know when something goes from being a fun hobby to a dangerous health risk.

The most important things to remember are to be safe and have fun! While some skeptics will always think that physical paranormal equipment will always trump apps like these, who are we to say that spirits aren’t just as likely to speak through us via our newer technologies?

Besides, a million unexplained things happen every day – why not add one more?

Scary Games to Play with Friends at Sleepovers
Who doesn’t love scaring the crap out of their friends with a good old-fashioned spooky game? If that person is
Lucky Numbers Dream Guide for 2022
Did you have a dream and knew that it meant something important? Are you getting ready to play the lottery
All About Wendigos
People around the world have told stories of terrifying monsters in the woods, and among Native American tribes, those tales